ENVISAT satellite acquired SAR imagery during the period 2002-2010. Many earthquakes occurred during this observation time and the analyses performed have consolidated the DInSAR as an extremely important technique to map and characterize co-seismic deformation. However, the DInSAR analyses were performed relying on different software and parameters, thus results are heterogeneous. In this challenge produce a homogeneous catalog of co-seismic deformation associated with earthquakes with Magnitude >5 by relying on the Envisat ASAR dataset.

Systematic processing of SAR data is a major trend due to the increased data availability and spatial/temporal coverage (e.g. DLR systematic processing of Sentinel 1). Accordingly, interferograms already generated and stored could be selected (filtered) starting from an input list (catalogue) defining date and time as well as coordinates of an earthquake event. After identification of the relevant interferograms, basic tools to measure results characteristics are necessary, i.e. extension of the deforming area, identification of linear features, etc. This information can later be useful for visual data mining as well as to obtain training datasets for machine learning algorithms used for automatic identification of specific features on SAR interferograms associated to earthquake events.

GH3: Automated/systematic detection of changes due to earthquakes

Earthquakes cause changes/damages that can be mapped tacking advantage of different EO data, as for example SAR data. In this challenge, we aim at automatically mapping co-seismic deformation and interferometric coherence changes due to earthquakes with M>5.

Surface deformation is one of the key features to characterize the evolution of active volcanic areas. The goal of this challenge is to implement a systematic monitoring of surface deformation at volcanoes showing signs of activity by taking advantage of Sentinel-1 radar imagery. To this aim, we exploit the Smithsonian institute in cooperation with USGS provides a Weekly Volcanic Activity Report (WVAR), where new and ongoing eruptive phases are listed, to automatically trigger Sentinel-1 interferometric processing.

When the surface deformation due to seismic events, volcanic activity, glacier motion, and/or slope instability is too large (meters or tens of meters) radar interferometry cannot be used due to decorrelation of SAR signal. In this case, feature tracking techniques can be applied. These approaches are convenient because they can be applied in a very similar way to different data sources, as for example optical and radar imagery. The aim of this challenge is to implement ad-hoc feature tracking algorithms to be applied to Sentinel-1 (radar) and Sentinel-2 (multispectral) satellite imagery.

Surface displacement retrieved with radar interferometry at active volcanoes is used to constrain the causative volume changes occurring in the subsurface. DLR monitors systematically with high-resolution Sentinel-1 SAR products a number of target volcanoes worldwide. The aim of this challenge is to implement a pipeline where ETHZ routines to model surface deformation at volcanoes are used systematically to provide an interpretation of  DInSAR results.

This challenge investigates landslides and the automatic mapping of the occurences with Deep Learning strategies. It can help to better understand the phenomenon and its consequences.

In this challenge, we aim at implementing a pipeline using Sentinel-1 data to map landslides caused by earthquakes.

In this challenge, we aim at implementing a pipeline that uses Twitter data to identify locations of earthquakes.

As a result of addressing the identified BETTER Geohazards challenges, ETHZ Zürich has improved the investigation of the effects of ground shaking and permanent displacements after large earthquakes. The efforts conducted in the BETTER challenge ETHZ-01-01-03 resulted in a catalog of homogeneous co-seismic deformations, produced from Sentinel-1 data, associated with earthquakes of magnitude larger than Mw 5. This dataset, compared with the ShakeMaps produced by USGS, has enabled us to perform quantitative analyses on similarities and discrepancies between static and dynamic displacements. Understanding the relationship between these physical processes improves our understanding of earthquake effects. 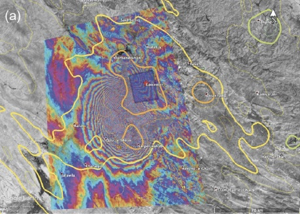 (Left) Overview of the earthquake events analyzed and an example of application (Right) to an Iran-Iraq earthquake (12.11.2017, Mw 7.3). Colour fringes are associated with the static deformation caused by the fault, contour lines are the areas affected by major seismic shaking.

This site uses cookies and Google Analytics to enhance your experience. When you continue to browse, you are accepting You are using an outdated browser. Please, upgrade your browser to improve your experience.